How to Buy Blackberry Shares UK

When you think of Blackberry, you probably think of the company’s smartphone – the leading mobile technology of its day, right up until the iPhone dropped. Over the past 15 years, Blackberry has largely receded from public view.

However, this company still has a huge portfolio and a significant valuation. Blackberry is a major market player in cybersecurity, the Internet of Things, and self-driving vehicle technology. Investors have recently taken notice of this activity – Blackberry shares jumped an incredible 286% in mid-January.

In order to buy Blackberry shares in the UK, you’ll need to find a stock app that carries shares of this company. Blackberry has been a penny stock on the US stock market for many years, so not every app offers trading on this company.

Thankfully, two UK stock apps do: eToro and Plus500.

eToro is one of our most highly rated stock apps in the UK. This app offers trading on more than 800 US shares, plus thousands more from the UK, Europe, South Africa, Asia, and beyond.

Even better, with eToro, you get to decide whether you want to buy shares outright and hold them for the long term or trade stock CFDs in the short term. Either way, trading with eToro is 100% commission-free.

Another great thing about this app is that it includes a built-in social trading network. You can connect with millions of other traders to see what shares they’re buying and selling or to start a conversation about Blackberry stock. You can also copy professional traders’ portfolios to build a diversified portfolio of up-and-coming tech stocks in seconds.

If you want to do your own analysis, the eToro app also gives you a handful of tools for that. The app features full-screen charts with over 100 technical indicators. There’s also a scrollable news feed and price targets from professional stock analysts.

eToro requires a minimum deposit of £160 to get started. You can deposit funds using a debit or credit card, PayPal, Neteller, or Skrill, but the app doesn’t support Google Pay or Apple Pay.

eToro is regulated by the UK’s Financial Conduct Authority and offers 24/5 chat support from within the mobile app.

Sponsored ad. Your capital is at risk.

2. Plus500 – UK CFD Broker with Hundreds of Stocks

Another benefit to this app is that Plus500 also sports a very wide selection of securities. You can trade over 1,900 stocks from around the world, as well as stock options for hot shares like Blackberry. 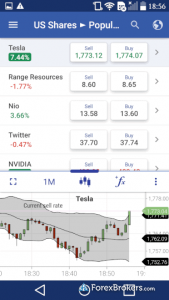 The app includes dozens of technical indicators, a news feed, and an economic calendar. In addition, Plus500 offers a market sentiment indicator that shows you whether traders are buying or selling shares like Blackberry. This is a helpful tool if you’re trying to stay one step ahead of price momentum.

The biggest downside to Plus500’s research features is that you won’t find much fundamental data or analyst research within the app. On the whole, the Plus500 app is more tailored to short-term traders than long-term value investors. 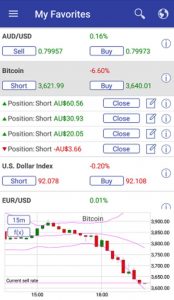 You can sign up for a Plus500 account with as little as £100. The app supports debit and credit cards, e-wallets, and Google Pay and Apple Pay. Another thing to like about Plus500 is that this broker offers 24/7 support.

Plus500 is regulated by the UK’s Financial Conduct Authority.

Blackberry (NYSE: BB) shares have been extremely volatile in the last month. Before you decide whether this stock is right for your portfolio, it’s important to understand more about what Blackberry does and where the share price could be headed.

Blackberry is synonymous with the company’s full-keyboard smartphone, which was first released in 1999. During the early 2000s, the Blackberry was the phone used by businesses and office workers. By 2008, Blackberry shares were worth more than $140 each and the company had a market cap of nearly $80 billion.

Then the iPhone came out. First released in 2007, Apple’s smartphone rapidly changed the mobile device market. Within a few years, Blackberry devices were used by only a small fraction of people. In 2012 – just 4 years after hitting new all-time highs – Blackberry shares were worth less than $7 apiece. For investors, that represented a staggering loss of 95%. 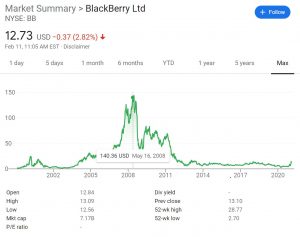 Blackberry stock never really recovered. The company stopped making its own smartphones in 2016, and the phones became almost impossible to find after the manufacturing license changed hands again in 2020. Over that time, Blackberry shares rose as high as $14 per share, but dropped to just $6 per share at the beginning of 2020.

The good news for Blackberry is that the stock didn’t have far to fall when the COVID-19 pandemic hit. Blackberry shares hit a bottom at $2.70, but recovered relatively quickly to $5 per share and remained at that level for most of last year. At that price, Blackberry had a market cap of $2.75 billion.

Then, in January 2021, Blackberry’s share price exploded upwards. The stock had caught the attention of traders on the Reddit group WallStreetBets, who noticed that Wall Street hedge funds had invested billions of dollars in short positions against Blackberry. Retail traders rushed to take the other side of this bet, causing a massive short squeeze. (A similar squeeze happened to Gamestop (GME) and AMC shares, driven by the same group of traders.)

In a matter of days, Blackberry stock gained 286% and reached a high of $28.77 per share. Trading was restricted by a number of online brokers in the US, and the shares subsequently fell to around $11.50 per share. 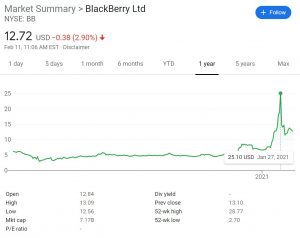 Today, Blackberry shares are trading around $12.70 apiece. Restrictions on trading have largely been removed, but the stock remains highly volatile.

The company reported an earnings per share (EPS) of -$1.48 in the quarter ending November 2020. Blackberry has not had a profitable quarter since 2018, but came close to breaking even for much of 2019.

Blackberry has never paid a dividend to investors – even when this was one of the hottest stocks in the US in the mid-2000s. Considering that the company has not been profitable for the past 2 years, it is highly unlikely that Blackberry will pay a dividend in the foreseeable future.

Are Blackberry Shares a Popular Investment?

Although Blackberry became famous as a smartphone maker, this company has almost nothing to do with smartphones anymore. Instead, it focuses on three key areas: cybersecurity, the Internet of Things, and autonomous vehicles.

The company offers several platforms that combine these three realms. Specifically, Blackberry makes software that can integrate data from multiple streams – whether that’s multiple tripwires and alarms making up a cybersecurity network, multiple sensors in a self-driving vehicle, or multiple gadgets connected by the Internet of Things. 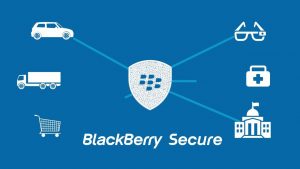 Given the growth in these three areas, there’s good reason to predict that Blackberry could see a comeback in the years ahead.

In fact, the company inked a deal with Amazon in December to build a software platform that can collect information from the sensors on autonomous vehicles. While Amazon isn’t itself a major competitor in the race to build a self-driving vehicle, this partnership gives Blackberry serious heft in the industry and positions it for partnerships with other automakers.

In the near-term, though, we think investors would be wise to hold out on Blackberry for a few months. Even after the Amazon partnership was announced, Blackberry shares were only trading around $7 apiece. Yet retail traders on Reddit have driven the stock up to nearly $13 per share.

While the stock might not drop all the way back to $7, giving it a few weeks to cool off and get out of the spotlight could enable you to buy into Blackberry at a steep discount. For reference, Wall Street analysts that track Blackberry have a 12-month price target of around $8 on this stock.

Investors should also be aware that Blackberry does face significant headwinds. Not only has it had a surprisingly difficult time getting a major automaker to use its technology, but Blackberry is losing money year after year. The company hasn’t turned a quarterly profit since 2018, and its earnings per share is expected to decline by 22% per year for each of the next 5 years.

A potential upshot is that investors in Blackberry will need to be patient. Some anlaysts believe this company has the right technology to meet some of the biggest trends of the next decade, but it still has a lot of work to do to bring that technology to market and prove that it can be profitable.

In the short term, we think Blackberry shares are a hold. If you’ve already got shares of this company in your portfolio, don’t sell them. If you’re not yet invested in Blackberry, don’t buy just yet.

We’d like to see the stock’s volatility drop in the wake of recent activity. Professional analysts have an $8 price target on the stock, and the $12.70 price of the shares right now seems high by most valuation measures. Look for the stock to drop to $10 per share or less before buying Blackberry shares.

Over the long term, we think Blackberry is a good investment. This company has transformed itself from a smartphone manufacturer into a software company focused on self-driving vehicles, cybersecurity, and the Internet of Things.

If anything, Blackberry looks to be just a few years ahead of its time. The company could potentially take off once self-driving vehicles get closer to production.

It’s important to do your own research and consider the risks of losing your capital before you invest in any stock, such as Blackberry.

Our Verdict on Blackberry Shares UK

Blackberry has transformed itself from a defunct smartphone manufacturer into a leading software developer. The company is poised to play a major role in self-driving cars, the Internet of Things, and cybersecurity.

Right now, the price of Blackberry shares is extremely high as a result of trading encouraged by social media and the WallStreetBets group on Reddit. However, look for a dip once excitement over the shares dies down. Remember to do plenty of research and beware of the risks before making an investment.

No, Blackberry sold the manufacturing rights for its line of smartphones to a company called TCL in 2016.

Has Blackberry been impacted by the COVID-19 pandemic?

Blackberry’s sales suffered as a result of the coronavirus pandemic. The company has seen slower sales of its software platform for autonomous vehicles in particular.

What exchange does Blackberry stock trade on?

Who is the current chief executive of Blackberry?

The CEO of Blackberry is John Chen, who has been running the company since 2013. He has overseen much of the transition from smartphones to software.

Blackberry shares were targeted by retail investors, along with shares of stocks like Gamestop and AMC. Wall Street hedge funds had heavily shorted Blackberry, and the buying activity by retail traders caused a short squeeze.

Kane Pepi is a British researcher and writer that specializes in finance, financial crime, and blockchain technology. Now based in Malta, Kane writes for a number of platforms in the online domain. In particular, Kane is skilled at explaining complex financial subjects in a user-friendly manner. Kane has also written for websites such as MoneyCheck, the Motley Fool, InsideBitcoins, Blockonomi, Learnbonds, and the Malta Association of Compliance Officers.

View all posts by Kane Pepi