Annual Transactional Value at Neo Banks to reach $3.4 trillion in 2022

A 1386% increase in value of transactions in 5 years 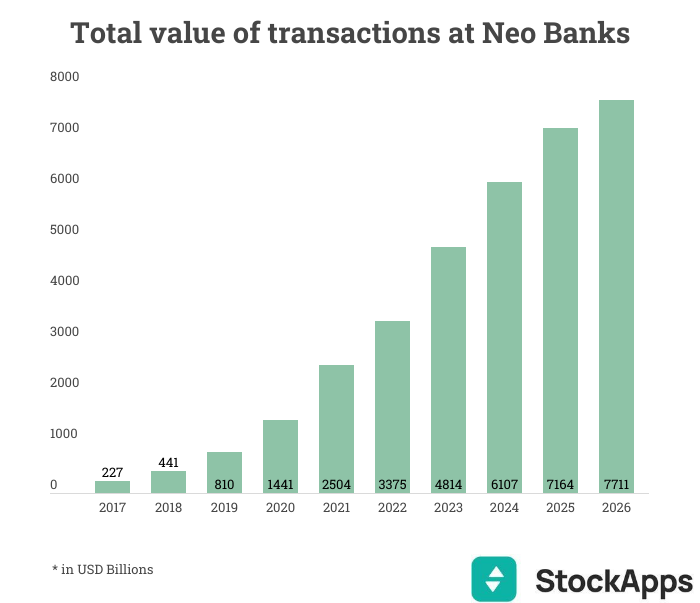 Neo Banks have become a common phenomenon in the digital age. The popularity of such banks has skyrocketed during the last few years. As mentioned before, the total investments at Neo Banks were worth just $227 billion in 2017. Next year, the figure almost doubled – an increase of 93.7%, to be precise. Customers made transactions worth $441 billion in 2018.

The rate of growth slightly dipped in 2019, as the value of transactions increased by 83.7% to $810 billion. In 2020, the annual growth rate further declined to 77.8%, but this is still an impressive growth rate. The annual transaction value also crossed the trillion dollar mark for the first time in 2020 as transitions reached $1.441 trillion in value.

The size of the industry is expected to keep growth in next few years. However, the growth rate will also continue to decline. According to the numbers, the yearly transaction value at Neo Banks will reach $7.7 trillion in 2026. However, the rate of annual growth would have significantly dropped to just 7.6%

The United States of America is the leading market for Neo Banks currently. In 2022, transactions worth $1,157 billion took place at US-based Neo Banks making up 33.7% of the global amount.