Easy accessibility to charging stations is one of the essential requirements in the global push toward electric vehicles (EVs). Meanwhile, most of the world is still preparing to build the necessary infrastructure; China has already taken significant strides. According to the numbers presented by StockApps.com, 65% of global public EV charging stations exist in China. 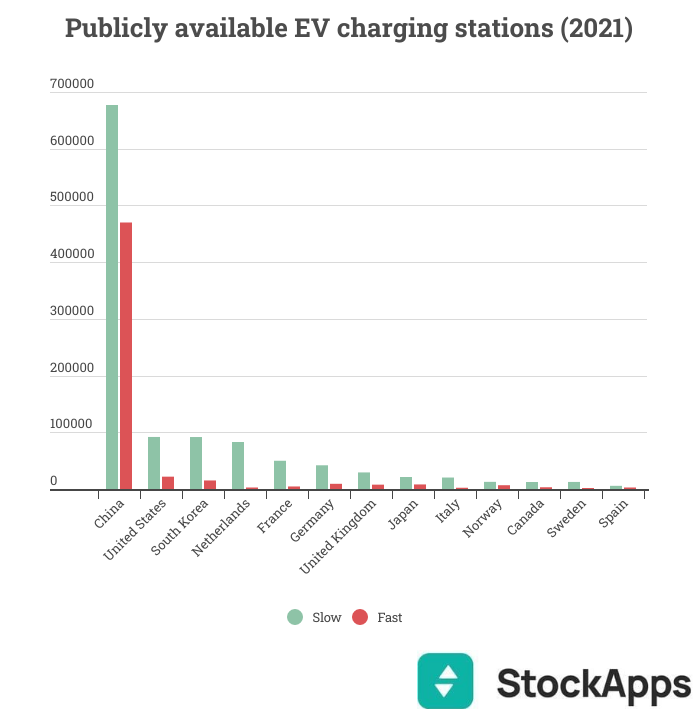 As the threat of Global Warming looms, more people are opting for electric vehicles. However, the adaptation hasn’t been swift in many parts of the world due to a lack of infrastructural support. Easy accessibility to charging stations is one of the most crucial concerns for prospective EV owners.

The United States of America finds itself in the distant second spot. According to the data, the US has only 113,527 charging stations, of which only 21752 are of fast-charging capability. Hence, a massive 81% of stations in the US have only slow charging capability. The huge gulf in the numbers of two countries is surprising considering the popularity of major EV maker Tesla in the US.

South Korea compares with the US despite having a minor population. The East Asian country has 106,701 public charging stations, including 15,067 with fast charging capability.

Expectedly, the list consists of developed economies from Europe, North America and East Asia. The Netherlands has the most public charging stations in Europe. It is fourth on the list with 85,453 stations. Three more European nations follow the Dutch in France (54,260), Germany (50,972) and the United Kingdom (36,984).

1 in 5 Registered US Voters Own Cryptocurrencies

Is Cryptocurrency A Good Investment?

Meta Has the Least Diverse Product Portfolio Among Big Techs, With 97% Of Its Revenue Coming From Ads in 2022